Do you ever find yourself using the same word over and over? Writing this blog, for example, we sometimes find ourselves overusing the word “word.” It’s hard not to when you’re trying to come up with useful words to talk about other words (and Microsoft Word)! Word, word, word, word…

But it’s a good idea to vary the language you use sometimes. And on that note, try keeping these tips on word variation in mind.

When to Vary Your Words

Generally, a bit of repetition is fine. In academic writing, for example, consistent terminology is vital for clarity. So you shouldn’t vary key technical terms. But you may want to vary your word choice if:

Word variation is easiest while editing your work, so don’t worry about it too much during the first draft of a document. However, when you have a first draft, go back through what you’ve written and:

One case where you might want to vary your words is when the same term occurs twice in the same sentence or in successive sentences. For example:

Cats were first domesticated 7,000 years ago, and the Ancient Egyptians worshiped cats for their elegance and poise.

Repeating “cats” at the start and end of this sentence is not ideal, so we’d want to edit it. This could be as simple as using the pronoun “them” instead:

Cats were first domesticated 7,000 years ago, and the Ancient Egyptians worshiped them for their elegance and poise.

If you wanted something more exotic, however, you could say:

Cats were first domesticated 7,000 years ago, and the Ancient Egyptians worshiped these furry felines for their elegance and poise.

This second version has a very different feel to it, too, since “furry felines” is less formal. As such, you can see how word variation can affect your writing.

The Peril of Elegant Variation

Varying terminology too much is known (sarcastically) as “elegant variation.” This means using variations of a term for no good reason. For instance:

Fire is an ancient part of human life. We may have first encountered a blaze when lightning struck dry vegetation. After that, it was only a matter of time until the human species could create its own conflagrations. And since then, combustion has been central to civilization.

Here, we’ve gone out of our way to avoid repeating the word “fire”. But this may feel forced, and excessive word variation can make your writing harder to follow or introduce ambiguity. So be careful!

In addition, many authors warn against varying the word “said” too much in fiction. If you’re introducing dialogue, “said” is fine most of the time. You can use other terms to show how something was said (e.g., “shouted” or “whispered”), but this should be done sparingly.

If you’re using a thesaurus or the “Synonyms” function in Microsoft Word to vary your words, be careful! These are brilliant resources if used correctly, but they can cause problems as well.

In this post, for example, we’ve used the word “word” a lot. But this term has several meanings, so not all the alternatives in a thesaurus will work. You can see this if you right click “word” in a Microsoft Word document, as the synonyms listed will include “chat” and “conversation.” However, neither of these would fit if you were using “word” to refer to a unit of language. 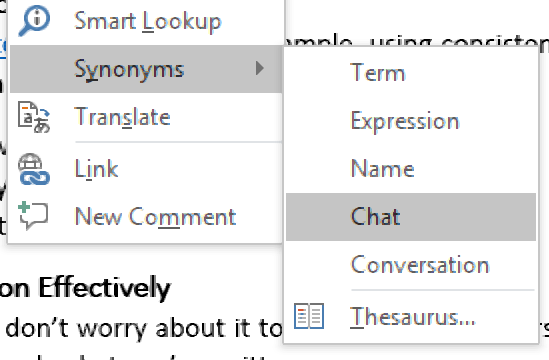 We have no “chats” for how bad these suggestions are.

Consequently, it’s vital that you check the meanings of unfamiliar terms before using them. And once you’ve written your document, don’t forget to have it proofread to make sure it’s error free.