Home A Guide to the Ampersand (&)

Today is National Ampersand Day. Why has someone dedicated an entire day to the “&” symbol? We’re not entirely sure. But it is a good excuse to look at how (and when) this symbol should be used. So make sure your writing is error free by checking out our guide to the ampersand.

What Is an Ampersand?

Even if you haven’t heard the word “ampersand” before, you’ll recognize its curly shape. And you’ll probably know it better as the symbol used in place of the conjunction “and.” You might have seen it used in terms like these:

This is because the ampersand was originally a ligature (i.e., a character that combines two letters) of “e” and “t,” which together spell the Latin word “et” (meaning “and”). You can still see this in some versions of the “&” symbol. 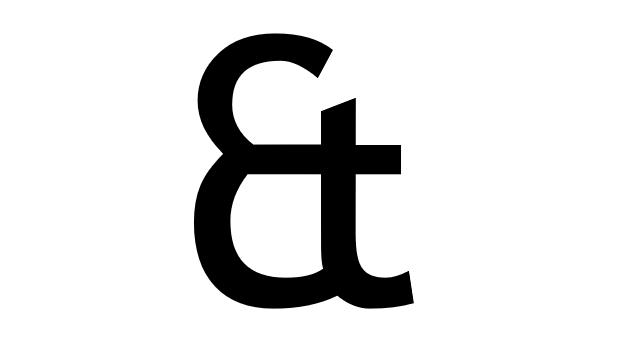 If you can’t see it, imagine a capital “E” resting its hand on the shoulder of a lower case “t.”

In essence, then, the ampersand is interchangeable with the word “and” in less formal writing. However, you should be careful about when you use it.

When to Use Ampersands

Most people know the ampersand symbol, so it is unlikely to cause confusion. And in informal writing, such as an email to a friend, you can use “&” in place of “and” whenever you like. Likewise, if you’re taking notes by hand, the ampersand offers a quick and simple way of writing “and.”

In more formal writing, though, the ampersand is less common. The only places you will see it in academic or business writing are in:

Even these can vary, though. The MLA Handbook, for instance, suggests replacing “&” with “and” when it occurs in a title. If you have one, then, you should always check your style guide for advice on ampersand usage.

More generally, we recommend only using an ampersand when you’re sure it is appropriate. And this will typically rule out the main text and titles of formal documents, such as essays or business reports.

What Does “Ampersand” Mean?

Finally, let’s look at the weird origin of the word “ampersand.”

It may now mean “and” by itself, but originally “ampersand” was a mispronunciation of the phrase “and per se and.” This can be traced to when “&” was treated as the 27th letter of the alphabet in the 1800s.

Let us explain. At the time, when school children recited the alphabet, they would use the Latin phrase per se when a letter was also a word by itself. So, for instance, “a” was read out as “per se a,” meaning “a by itself.”

At the end of the alphabet, meanwhile, children would say “x, y, z, and per se and.” And if you say “and per se and” fast and often enough, it will eventually slur into something like “ampersand.”

So why is the “&” symbol known as an “ampersand”? Because nineteenth-century school children were rushing when reciting the alphabet. In summary: The English language is sometimes quite stupid.